More refined and better to drive than many of its rivals, impressive interior quality, powered by excellent range of diesel engines. Report of problems with 2018 Chasson Motorhome on Ford Transit chassis. During the first week of owning it the hand brake failed and a Ford dealer fixed it under the Ford warranty (see 23-9-2019 above).... Read more

Reader bought a brand new Transit 350 in Dec 2018 and spent several thousand pounds having it fitted out as a mobile workshop for his business. The van has now been back with the dealer for 6 weeks having... Read more

Backbone of Britain. That was the previous Transit's claim to fame and one that was very true. It's nigh on impossible to complete any journey without seeing a Transit van and it continues to prove by far the most popular van choice - in fact it's Ford's third best selling model in the UK after the Fiesta and Focus.

So a new model is always going to make big waves. And this new Transit does just that. For starters Ford has split the range so that the smaller one-tonne model is now called Transit Custom with the traditional Transit name reserved for the larger two-tonne models. Compared to its predecessor this Transit is now far more refined and comfortable, plus it's better to drive helped by a new stiffer platform.

The interior is a huge step forward with a car-like layout and impressive comfort. The quality has markedly improved and it's now good enough to match the likes of the latest Mercedes-Benz Sprinter. It's functional too with good storage and plenty of space for both driver and passengers.

Power comes from a 2.2-litre TDCi diesel engine with three outputs, 100PS, 125PS and 155PS, all linked to a positive shifting six-speed transmission as standard. Front, rear and all-wheel drive variants are available. The engine is powerful with plenty of torque yet it's impressively refined with little noise while better sound insulation makes the Transit very quiet on the motorway. Economy is better too with the best Econetic models averaging a claimed 44.1mpg.

In 2017 Ford replaced the 2.2 TDCi with the EcoBlue diesel engine and added a six-speed automatic gearbox to the range for the first time. Power outputs were also increased to 105PS, 130PS and 170PS.

There are a huge number of model variants - 450 in total - with three different lengths and two different roof heights. The side load doors are now wider while more vertical body sides make the load area more usable plus all panel vans come with an integrated high-grip rear bumper step too. The biggest Transit Jumbo can carry a maximum of 15.1 cubic metres although rivals like the Volkswagen Crafter can carry more. Alongside the panel van there are double cab-in-van version, chassis cabs and the minibus range.

Ford has succeeded in improving the Transit in all the key areas making it an even better van. Yet its not lost touch with the key features that have made its predecessors so popular. It's still practical, functional and robust but now has impressive refinement and a higher quality feel.

Ford has massively improved the cabin of the Transit along so although it's still tough and functional it now has the latest Ford design. Quality is impressive and it's clear a great deal of care has gone into the fit and finish. It's fully trimmed with no exposed paintwork and has an upmarket feel that rivals the Mercedes-Benz Sprinter. It's also very comfortable with an eight-way adjustable drivers seat and a steering column that adjusts for both height and reach.

There's plenty of room behind the wheel - you're certainly not hemmed in - and it's the same for the two passengers. There is more headroom than the old van and taller drivers will find more legroom too, so you don't have to squeeze in. For long distances the Transit is the ideal van. Storage is plentiful with a full-width overhead shelf that's sturdy and has two sections in the middle with a grippy lining so things won't slide about.

Alongside that there are the usual bog door pockets, cupholders either side and a large hidden compartment under the dual passenger seat. All models come with two 12v sockets as standard while a 230V three-pin socket is a £60 option and very worthwhile if you want to charge tools or laptops on the move. You can also fit A4 files in the glovebox.

It's not just the cabin which has been improved. Ford has worked to make the load area bigger and more useable. Model for model, capacity has increased by around 10 per cent although it's surprising that the largest Jumbo Transit can only carry 15.1 cuvic metres when rivals like the Volkswagen Crafter can carry 17. That said, the L2 van volume has risen from 10.3 to 11.2 cubic metres, meaning it can now carry four Europallets and cope with items up to 3.0 metres long.

The standard panel van is available in three different lenghts and two roof heights but all versions benefit from improvements. There's now an integrated high-grip rear bumper step as standard while the sides of the van are more vertical meaning more useable space, especially useful for those carrying tall items like furniture or white goods.

Trend models come with an integrated plastic load floor cover designed to be durable and easy to clean. It rises up 100mm on the side walls making it easy to sweep or wash out. It's a £270 option on the Base model but seems a good investment considering it will protect the load floor.

The Transit comes with a single side load door as standard which has a class-leading opening width of 1300mm for easier loading with forklifts. Dual doors are available as an option but only on the H2 medium roof line Transit. One useful option we'd recommend are the LED lights for the load area which are incredibly bright and really useful if you're going to be checking paperwork in the back before unloading. 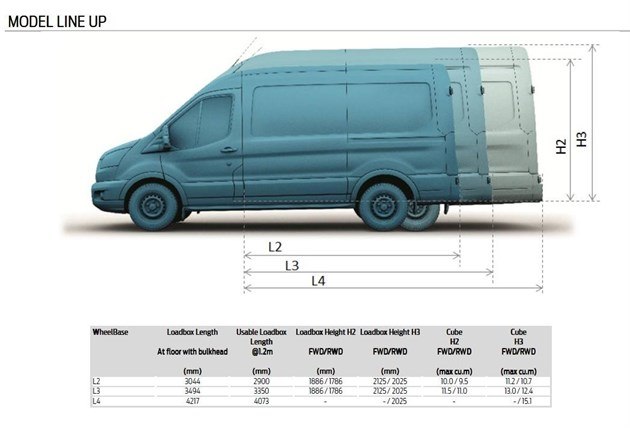 Ford has worked hard to improve refinement in the new Transit and it is certainly much quieter than its predecessor, particularly in terms of engine and road noise. Like the smaller Transit Custom it's quiet on the move and the ride is very impressive indeed, coping well over potholes and speed bumps whether the van is empty or fully laden. You don't get any vibration from the diesel engine in the cab and reassuringly there are no rattles when you're on poor road surfaces.

This Transit is based on a new platform which is considerably stiffer and it shows in the handling. It's surprisingly nimble for a large van and even the long wheelbase models feel agile. The steering is responsive so that it's easy to quickly manouevre into a tight parallel parking space, helped by a tight turning circle, while on twistier roads it gives you plenty of confidence with good front end grip and predictable handling. There's not excessive lean in corners while the brakes have plenty of feel through the pedal.

But it's on the motorway where the new Transit really impresses. At around 70mph it's hushed and relaxed with the TDCi engine barely breaking a sweat. It's easily as good as the latest Mercedes-Benz Sprinter and Volkswagen Crafter, vans which have traditionally been more premium. For long distance work it's the perfect choice and you can happily leave it in sixth gear to make effortless progress.

There's one engine in the Transit - the strong 2.2 TDCi - and it comes in three versions of 100PS, 125PS or 155PS. A positive shifting six-speed manual is standard on all models and front-wheel, rear-wheel and even all-wheel are available, although the latter is only available with the 125PS engine and in limited bodystyles.

The more powerful 155PS engine has more torque with 385Nm and it's a good choice if you're going to be covering long distances with heavy loads or trailers. But for lighter work you'll be hard pressed to notice the difference between the two. If it's outright economy you're after there's the Econetic version which now extends to six different models. It has a specially calibrated version of the 125PS TDCi engine and comes with start/stop. When fitted with a 62mph speed limiter it improves fuel economy to 44.1mpg with CO2 of 169g/km.

In 2017 Ford replaced the 2.2-litre unit with the 2.0-litre EcoBlue diesel engine. Power outputs increased to 105PS, 130PS and 170PS, while a six-speed automatic gearbox was also added to the range. Claimed fuel economy for the new engines vary from 37.2mpg to 42.8mpg. Emissions is 182g/km for all versions.

All Transit models come with ESP as standard which includes a new curve control system designed to slow the van down safely if it goes into a bend, such as a motorway exit slip, too quickly. Alongside that are load adaptive control, hill start assist and trailer sway control. Trend models also come with front and rear parking sensors and there's a clever reversing camera that displays in the rearview mirror, available as an option.